You may have noticed “Red Flag Warnings” in the news and on weather sites in recent weeks. 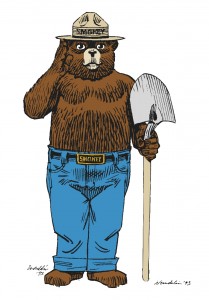 A Red Flag Warning is issued when the danger of wildfire is elevated, and the low humidity and breezy conditions of the past few weeks have done exactly that.

The site goes on to state that three factors combine during the spring and fall months to create a perfect storm of sorts: long, warm days and bare trees that allow sunlight to dry out the leaves on the forest floor; windy conditions; and careless people burning debris and trash.

“In Pennsylvania lighting-caused fires are relatively rare. Ninety-eight percent of our wildfires are caused by people,” DCNR states. “One of the major causes of forest fires in Pennsylvania is debris burning.”

Let that sink in for a moment: “Ninety-eight percent of our wildfires are caused by people.”

One of the big questions that comes to mind is, “Why?” In the 21st century, most of us have access to trash, recycling and composting services — of which the last two are often provided for free or at a nominal charge. So why are we still burning trash, leaves and twigs — or, better yet, why are people burning things when the risk of wildfire is so high?

A few weeks ago, more than 400 acres of the Blue Mountain went up in smoke. The cause is still under investigation, but officials said it does not appear to have been from natural causes. It took firefighters from six counties and Harrisburg to get the blaze under control.

The best way to avoid these fires is to stop burning trash and debris. Compost yard waste, or arrange for the pick up or drop off yard waste at a site in your municipality. (For instance, Allentown residents can drop off waste at the city’s site — click here for information.)

If you must burn, wait for a damp or rainy day with no wind. And, of course, check with your municipality first — many ban the burning of yard debris or trash, in part because of the risk such fires cause.

Finally, remember the immortal words of Smokey The Bear: Only you can prevent wildfires.