Philadelphia’s Dumpster pools have been all over the news, so it seems a good time to remind everyone (especially with a wave of 90-degree-plus weather predicted for later this week) that it is NOT cool to use hydrants — or Dumpsters — to beat the heat.

While the idea of using a trash receptacle for a pool is pretty disgusting — even if it is power-washed and lined with tarps — the bigger issue is the use of fire hydrants to supply the water.

Not only is it illegal to open a hydrant, it’s extremely dangerous.

First and foremost, hydrants are there in case of a fire. Opening a hydrant lowers water pressure in the surrounding lines — and increases the likelihood that if there is an emergency, firefighters won’t have enough water pressure to adequately battle a blaze. 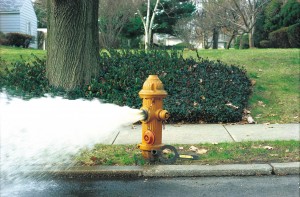 Secondly, when those hydrants are opened, the water that comes out is under a lot of pressure — enough to knock someone over, especially a child. And that sudden release of pressure (and the sudden increase, when they’re capped) could damage the neighborhood’s water lines.

And last, but certainly not least, is the amount of water that’s wasted: An illegally opened hydrant can release more than 1,000 gallons of water a minute.

So the next time it gets hot, find another way to cool down — one that doesn’t involve hydrants or Dumpsters. (besides, do you really know what’s been in that Dumpster? YUCK!)