It’s the time of year when we start clearing leaves and preparing our homes for the colder months.

As you put together your to-do list this fall, don’t forget to include checking your plumbing. Frigid temperatures can cause uninsulated pipes to burst — causing costly damage to your home.

Start by examining water pipes. Insulating pipes — especially any that run along an outside 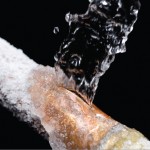 wall or are outside the residence — can save money by preserving hot water and prevent costly problems by keeping those pipes from freezing. For pipes that run outside a residence, adding a wrapping of heat tape is also recommended. Just ensure that the tape is UL listed and is installed according to the manufacturers’ instructions to avoid problems. (In some cases, insulating your pipes can net you state or federal tax credits. Check here to find out if you qualify.)

Make sure to turn off water to all outside faucets (there should be an indoor shutoff valve; if not, it’s a good idea to have a plumber install one), then drain them by opening the valve outside. You may want to consider adding a faucet cover as an additional measure of protection (especially if there’s no way to shut the water off). If you’re winterizing a vacation home, take a look at this handy checklist).

Next, check the caulking around your windows. If it’s old and cracked, falling out, or just plain nonexistent, replace it. This will help to keep out chilly drafts, moisture, and even insects.

You may also want to consider replacing older windows with energy-efficient models that can block harmful UV rays and keep outside temperatures where they belong: outside. A cheaper alternative may be installing storm windows, which will provide an extra layer of insulation and protection when the winter winds blow. An even cheaper solution is a window insulation kit, available at hardware or discount stores.

If there are drafts sneaking under your doors, there’s an old-time tip that works great and costs nothing: Place a rolled-up bath towel against the bottom of the door. For a more stable fix, attach a vinyl door sweep.  They’re held in place via an adhesive backing, so no tools are required, and they cost just a few dollars.

If you don’t have one already, consider installing a storm door, which will go a long way toward sealing out drafts. There are plenty of Energy Star-certified models to choose from.

You’ll also want to check for gaps in spots where different building materials meet: chimneys, foundations, and areas where pipes or wiring enter the home. For an easy, DIY tes
t, hold a lighted stick of incense a few inches away from interior walls and move it slowly from o
ne end to the other: If the smoke wavers, it’s indicating an air leak.

Next, make sure your furnace is up to the task by installing a new air filter and having the unit inspected by an HVAC professional.

You should also consider adding more insulation to the attic and inside exterior walls. It’s one of the most cost-effective ways to save money year-round, and in most cases, it also qualifies for a tax credit.

Finally, a quick note about clearing those leaves: Instead of burning them, consider composting them, or taking them to a composting facility — such as Allentown’s, if you’re a city resident. They can also be used  to protect shrubs, bushes and other plants that might not survive frigid temperatures — a layer of leaves around the outside can help to insulate them. Burning leaves not only presents a fire hazard, it produces thick clouds of smoke that can trigger asthma attacks — and it’s not exactly environmentally friendly, either.