If you look at a drought map for the western United States, you’ll see that conditions there are, in a word, grim.

In Arizona, much of the state has been experiencing a moderate drought, with some sections suffering under extreme drought, severe drought or abnormally dry conditions.

And now the region is facing a new challenge: water exports.

Only these exports aren’t as obvious as, say, water being bottled and shipped out of state.

It’s in the form of alfalfa hay, and the shipments aren’t just leaving the state – they’re leaving the country.

A recent story from NPR 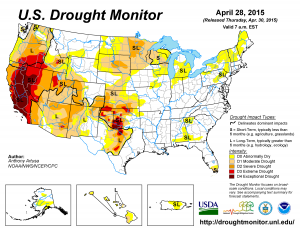 reveals that Saudi Arabia’s largest dairy, Almarai, purchased about 15 square miles of desert property — and they’re using it to raise the hay.

According to the story, the property came with “about 15” water wells capable of producing about 1.5 billion gallons of water each.

And it’s all coming from the already-strained underground aquifer. The story goes on to explain that Saudi Arabia can’t grow hay on its own soil anymore — because the crops drained “its own ancient aquifer.”

Although the property had been farmed previously, the crops — including corn and cotton — weren’t as thirsty as the alfalfa, which needs an incredible amount of water to thrive — and thrive they do: According to the story, “hay yields in the desert are the best in the United States.”

Laws put in place in the 1970s were designed for local farming — and therefore, the story explains, aren’t up to snuff for dealing with exports like these, meaning there are no limits on how much water the company can use.

The story highlights yet another challenge to the nation’s already-strained water supply — and is perhaps a precursor of things to come, as drought-stricken countries look to other sources to quench their thirst.