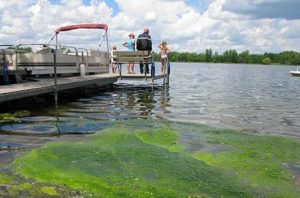 For all that we’ve written here about algae — like the fish-killing, toxic effect algal blooms have on Lake Erie and other waterways, and the role that nutrient pollution has on accelerating its growth — you’d think we absolutely detest the tiny organisms.

But like everything in nature, algae has a purpose, and researchers have long wondered if it can be harnessed in more ways than nature intended. A recent email newsletter from the online magazine Quartz Obsession even asks, “Can Pond Scum Save The World?”

Types of algae are everywhere. You’ve seen examples in lakes, rivers and ponds, and in the ocean, too — seaweed is a form of algae. It comes in all different colors, too: there’s red, blue, green, gold, and even clear algae. And it turns out that humans have been putting algae to good use for centuries. The Romans used algae to treat wounds, and the ancient Egyptians may have used it to treat breast cancer.

Today, scientists are finding even more uses for the plant — such as creating biofuels that, it’s hoped, are far less toxic than those created by corn; organic plastics that can replace toxic synthetics; as a type of fertilizer; as a source of electricity; as a way to power wastewater treatment plants, and even as a way to purify water.

It’s been used as a food source all over the world for centuries, from Ireland to China, Chili to Iceland, and beyond — and some companies are betting on it as a way to end world hunger.

And despite the fact that algae blooms can be toxic and can suffocate fish (as the blooms die, they create excessive carbon dioxide levels in the water), living algae is one of the of the most important sources of oxygen in the world: Through photosynthesis, all the known species of algae create more than half the world’s oxygen while also absorbing massive amounts of carbon dioxide. Quartz points out that it’s even being used as a “carbon sink” by some companies.

What excites researchers so much about algae’s potential is that it can grow rapidly in all kinds of water, in all kinds of temperatures and weather, and is so tiny it can be grown in small spaces.

So while out-of-control algae blooms in our waterways are a bad thing, the potential for algae to do good is only just being explored.