There’s no getting around the fact that costly upgrades are needed for Allentown’s more than 600 miles of aging water and sewer lines. Over the next 45 years, LCA expects to spend $1.3 billion on infrastructure improvements in the city. 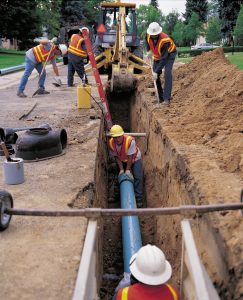 But Allentown and LCA aren’t alone in this struggle: Communities across the country face the same problems.

The fact is, our nation’s water and sewer infrastructure system is old — in some places, lines have been in use for more than a century. And because repairs and upgrades have repeatedly been put on the back burner — in the city and across the country — that water infrastructure is failing.

While water main breaks, leaks and outages are among the most obvious — and commonplace — symptoms of the failing infrastructure, there are health and safety aspects to the problem, too: Leaks and breaks can allow contaminants to enter already treated drinking water before it reaches the tap, and some of those old lines contain lead. USA Today reports that more than 2,000 water systems across the U.S. have lead levels that exceed federal limits.

Additionally, experts say updated water quality tests and treatment systems are needed to detect and remove new and emerging contaminants that weren’t a concern in the past. Some of these stem from chemicals contained in household, industrial and agricultural products that can cycle back into drinking water supplies.

Here are just a handful of U.S. municipalities and the costs they face for infrastructure upgrades:

LCA’s move to raise rates and institute monthly billing to help, in part, defray the cost of repairs to Allentown’s water and sewer infrastructure has, understandably, caused concern. But the cost of doing nothing now is much higher than the cost of delaying these repairs any longer.