We occasionally get calls from concerned customers asking about a pink, slimy substance that forms in pet water dishes, around toilet bowls and drains, on tiles and in shower stalls.

So what’s the source of this gruesome goo?

We can assure you of two things:

1.) It’s not caused by anything in the water you’re getting from LCA

2.) It’s (probably) not caused by a wayward monster from a B horror movie.

Believe it or not, the Attack of the Pink Slime is actually quite common, and is caused by airborne bacteria (called  Serratia marcescens), mold, and yeast spores that thrive in damp environments.

Technically called a biofilm, this slime can be more widespread in the presence of fatty substances — things like soap residue in the kitchen sink and food debris in pet water dishes. If you’re using a filtering system (such as a Brita Water Pitcher) that removes chlorine from your water, the pink slime has an easier time getting established. Chlorine also naturally disperses from your tap water when the water is exposed to the air for a period of time, which is why the pink slime is more likely to appear in toilets and pet food bowls.

We’ve found the best way to control the slime is through frequent cleaning with a mild bleach solution, although it can also be removed with a vinegar-and-water solution. To get around sink fixtures, use an old toothbrush. Pink slime grows very well on surfaces such as limescale (white flaky stuff that sometimes appears around water fixtures), so be sure to eliminate that as well. 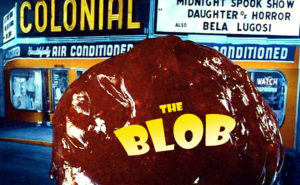 To further reduce the chances of a pink slime attack, install a ventilation fan in the bathroom and dry off bathtub, shower and sink fixtures after use.

While we’re certain these tips will help, if the pink slime starts to form into the Blob and oozes up and out of your sink, you’re on your own.