With Thanksgiving right around the corner, we thought it would be fun to take a look at the amount of water it takes to 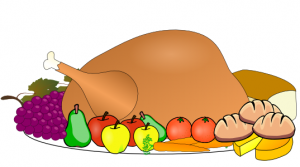 make some of our favorite foods. For this experiment, we turned to the Los Angles Times and used their interactive graphic, which measures the amount of water it takes to produce a corresponding amount of food.

So without further ado, we invite you to dig in:

First up is the beer you’ll drink during the big football game. Every 16 oz. you knock back takes 31.4 gallons of water to produce.

Next is the turkey, and for this one, we admit we had to cheat a bit — “turkey” is not one of the foods listed on the graphic. We got as close as possible, though, and went with chicken. It turns out that a 10-oz portion of turkey … err, chicken … on your plate took 166.1 gallons of water to produce.

So assuming that you had just one beer, and nothing else to drink, and just one portion of everything, your meal took 620 gallons just to produce. That’s not even counting the water it took for the chef’s hand washing, the amount of water needed to cook the food, and the amount of water it’s going to take to wash all those dishes.

Pretty mind-blowing, right? Granted, it’s really just an estimate, but when you start to break down how much water we use — our water footprint — every day, it’s sobering. According to National Geographic, the average American uses 2,000 gallons of water every day: twice the global average.

So as you sit down on Thursday and reflect on all the things you’re thankful for, put clean water on that list.

From all of us at LCA, have a happy and safe Thanksgiving.