Fireworks are a part of every Fourth of July, and sadly, so are fireworks injuries. According to the Consumer Products Safety Division, about 11,100 people were treated in U.S. hospital emergency departments in 2016, and at least four people were killed. Of the injuries, about 7,600 — well over half — came during the one-month period bookending the holiday (June 18-July 18).

The most injured body parts are hands and fingers, with eyes, faces and ears coming in 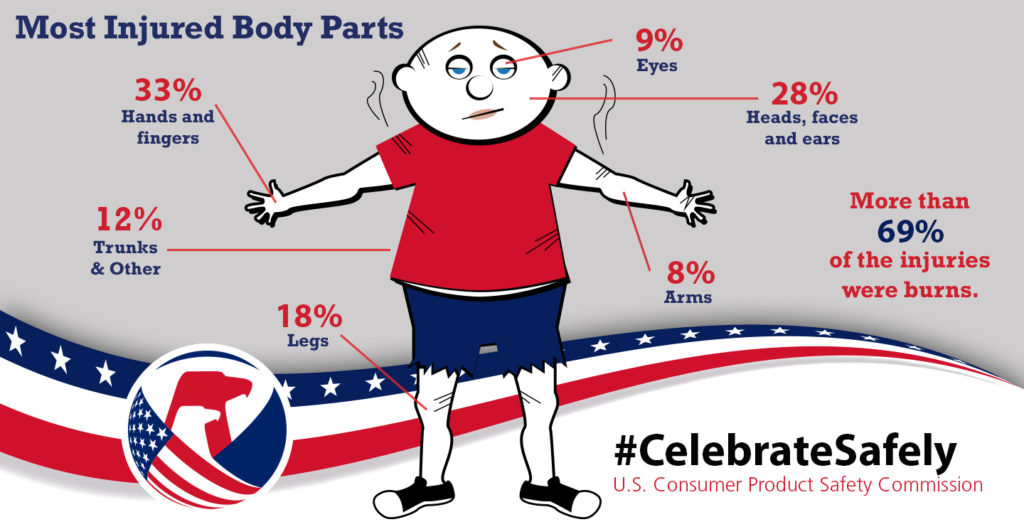 second. More than 50 percent of the injuries were burns.

Fireworks are also responsible for “an average of 18,500 fires per year, including 1,300 structure fires, 300 vehicle fires, and 16,900 outside and other fires … [including] an average of three deaths, 40 civilian injuries, and an average of $43 million in direct property damage,” says the National Fire Protection Agency.

This year, Allentown is one of the cities fighting back: Lehigh Valley Live reports the city is cracking down on illegal fireworks, with a “no-tolerance policy” that includes a $100 fine and confiscation of the fireworks.

It’s not just illegal fireworks, though — sparklers, available almost anywhere and considered by many as a “safe” alternative, burn at a temperature of about 2,000 degrees — as hot as a blowtorch, and hot enough to burn certain metals, not to mention skin.

This year, take precautions to ensure that your Fourth of July celebration is injury free by following a few tips from the CPSC — and check out the video below from the National Fire Protection Agency.

We at Lehigh County Water Authority wish you a safe, fun-filled Fourth of July holiday – and that you leave the fireworks to the pros!