President Obama passed the Water Resources Reform and Development Act (WRRDA) on Tuesday, paving the way for the creation of the long-awaited Water Infrastructure Finance and Innovation Authority.

We first wrote about WIFIA back in 2012, when we reported that “Communities across the country are being confronted with a daunting challenge: replacing the aging, underground pipes that carry drinking water while also expanding service to meet the needs of a growing population.” 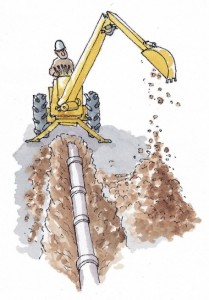 WIFIA is a crucial step in the path toward repairing and replacing our nation’s antiquated water infrastructure system. Many cities are using water mains put in place more than 50 years ago; in fact, some older communities have pipes that were first put in use a century ago. As they fail, they waste an incomprehensible amount of water: New York’s DEP found that a section of the city’s 85-mile long Delaware Aqueduct was losing up to 36 million gallons of water a day. And in Pittsburgh, a 2008 report to the state DEP showed leaks accounted for a loss of about 42 million gallons of water a day.

WIFIA will help water utilities gain approval for low-interest loans that can be used for infrastructure improvement, which would otherwise be prohibitively expensive.

The bill authorizes the U.S. Army Corps of Engineers to embark on a $12.3 billion plan to renovate and restore  34 new port, levee, and ecosystem projects. It’s the first new round of water infrastructure spending to garner congressional approval since 2007.