Back in 2013, we posted about a finding by Swedish scientists that showed drugs in water were affecting fish:

“Scientists in southern Sweden found that fish living near a sewage treatment plant have low levels of psychoactive drugs — benzodiazepines — in their systems. Further study has scientists speculating that these anti-anxiety drugs are having an effect on the behavior of the fish. When they placed normal perch in a fish tank and added the same levels of the drugs, the fish started eating more aggressively and became more active, but also more antisocial.” 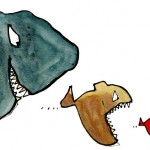 Now another study — this one from Finland —is finding that medication in water is having a similar effect on fish. However, this study questions whether the drugs may actually be helping the fish:

“A study published by researchers at Umeå University showed that remnants of oxazepam, a drug used for anxiety, resulted in braver and more curious activity among normally timid fish.”

The article, posted on the Water Online website,  reports that scientists say the fish are experiencing a lower mortality rate than those that aren’t exposed to the drug, and it may be because they’re eating more: “It is possible that since fish exposed to the drugs explore their surroundings more boldly, they find more nutrition, and thus they fare better,” the Helsinki Times reported.”

While that may sound like a positive, it’s unknown what kind of long-term effects medications could have on wildlife. Historically, animals that find a new food source — or start eating more of their present source — drive other animals into extinction. And what happens to the animals that eat those fish?

Furthermore, while the EPA says studies have shown no adverse effects on humans, why take the risk?

Some medications will end up in our lakes and rivers regardless of what we do, because they pass through our bodies in miniscule amounts and, as yet, cannot be caught by wastewater treatment plants. However, that’s not the only way they’re getting in the water: They’re being flushed down the toilet and dumped down the drain, posing a potentially serious threat to water supplies around the world.

We hope you participated in this weekend’s National Drug Take Back Initiative. Unused medications don’t belong in our drinking water. Dispose of them properly. For more information, check out this page from the FDA, which includes guidelines on safe disposal practices.